It takes a village to achieve greatness.

No one can accomplish dreams alone; it takes a group of people to accomplish destiny. Did Tom Brady win the Super Bowl five times without help? Was Sidney Crosby riding solo on the ice when the Pittsburg Penguins won the Stanley Cup? The answer is no. They had groups of people by their sides every step of the way leading them to success. They did not achieve these goals by acting alone; they had teammates, families, and coaches who selflessly donated help and expertise to push them to achieve their goals.

SNHU hockey phenome Kurt Gutting is an individual whose friends and family have allowed him to travel farther in his hockey career than he could ever imagine. Thanks to his father and past and present teammates and coaches, Gutting has achieved his ambitions of securing a starting position on a D-II hockey team while being recognized by the NCAA as a top goaltender in the Northeast region.

In only his second season with the Penmen, Gutting, who is currently the Penmen’s second-string goaltender, has a whopping .941 save-percent average. He has played in just 11 games thus far this season and has made 321 saves while allowing just 20 goals against. Senior starting goaltender Ryan Slatky, who has been one of the highest ranked goaltenders in the Northeast-10 for the majority of his career, was forced to sit out for a portion of the season due to a groin injury. This prompted Gutting to step in and showcase his skills. Because he performed so well, he locked up the starting position next season.

“When he came in, he was always good,” said Slatky about Gutting. “I’m really impressed with what he is capable of doing on the ice, especially as a younger guy. As the starting goalie, I do what I can to help him. He works his tail off. He’s done a really good job so he’s going to do a great job when he takes over the starting spot next year.”

Gutting’s hockey career began in his hometown of Weymouth, Massachusetts at just six years of age when his father brought him to a frozen pond where they skated and hit pucks. Though small, this introduction to hockey was a monumental step going forward in Gutting’s hockey career, as it was the moment he knew he wanted to pursue hockey. Because of his father’s interest in seeing Gutting play hockey, Gutting sees him as the driving force behind why he continues to play. If it weren’t for him, he says, he never would have developed the passion and love for hockey that allowed him to become one of the NCAA’s best Division-II goaltenders.

Gutting continued playing pond hockey with his father until he was about nine when he started playing hockey competitively. Unlike the majority of his teammates, Gutting did not play hockey through a club; instead he played for the town. 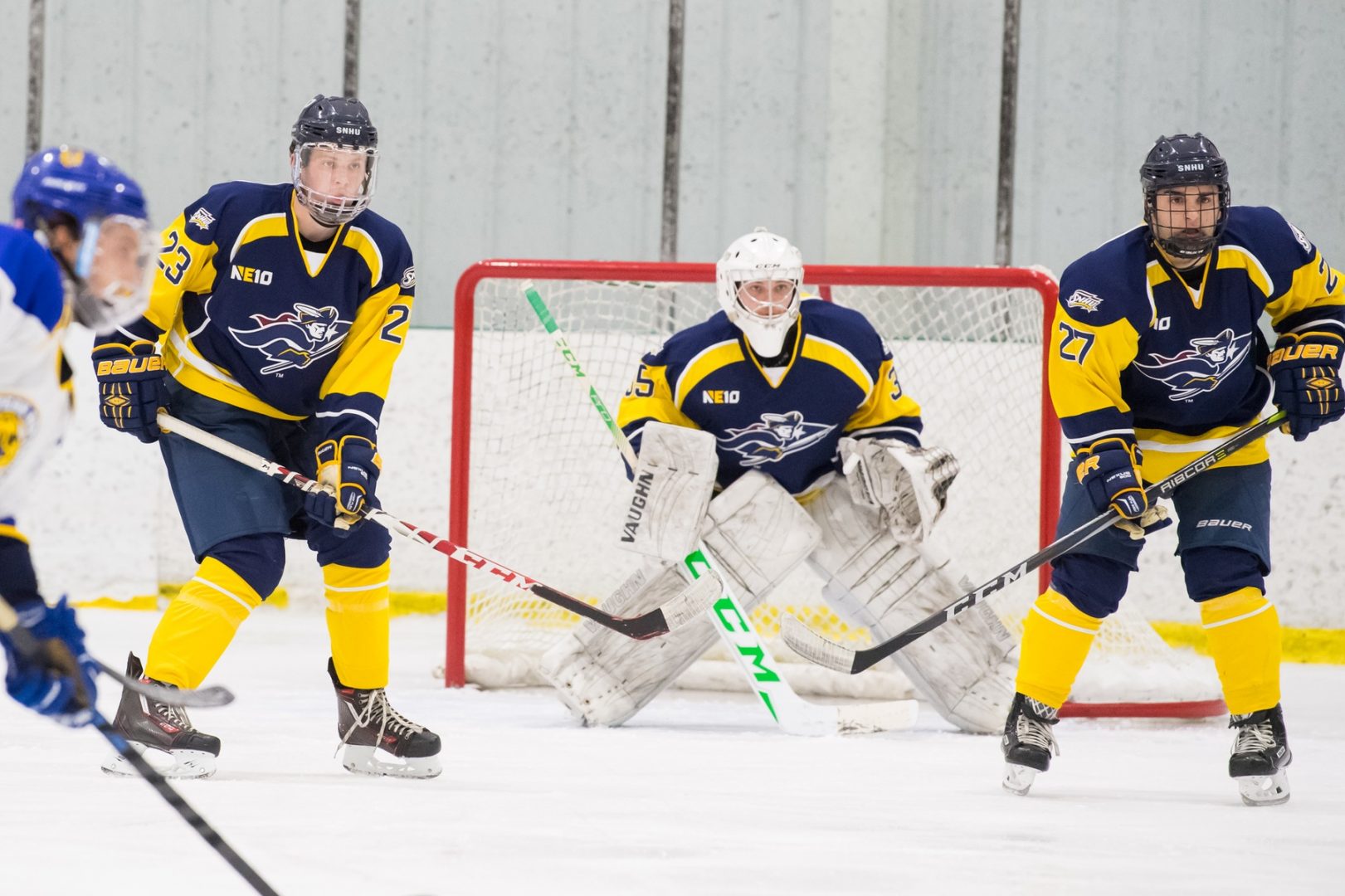 Although the competition for playing hockey for the town was less than that of playing for a club team, Gutting says playing for the town of Weymouth was ideal for creating bonds and relationships with his teammates, which is an aspect of hockey he says is “very important.” He and his teammates played together all throughout their youth and through high school. Because they spent so much time together, he became close friends with most of them. He even said they have made him a better player because they “inspired and motivated (him) to play (his) best each and every day.”

Not only did Gutting have good relationships with his former teammates, he also had great connections with his coaching staff. In fact, Gutting identifies one of his assistant coaches, Ryan Nash, as his mentor. Nash was also a goaltender growing up, so Gutting looked to him for expertise. Nash taught Gutting everything he knows about the position and offered new techniques and strategies to perfect his game.

When Gutting graduated from Weymouth High School in 2014, he played two years of junior hockey in Waterville Valley, New Hampshire. During his second year, former Southern New Hampshire University head hockey coach, Ken Hutchins, reached out to him and offered him a position on the team. Gutting took the offer and joined the Penmen the following year.

“I’m really happy to be with the Penmen,” said Gutting. “I’m very lucky to be with a great group of guys who I consider to be some of my best friends. Plus, I’m really happy with the way I’ve been playing. Hockey is one of the most important things going for me right now. It’s one of the biggest aspects of my life so it’s really important to me to succeed and I’m doing just that with SNHU.”

Much like Nash, current head SNHU coach Sean Walsh has greatly impacted Gutting’s performance. Gutting is just one of many talented goaltenders Walsh has coached. Walsh, who is only in his first season with the Penmen, is very technical when it comes to attributes of the position, so he helps Gutting in any way he can so he can further improve his game.

In addition to Walsh, Gutting’s success at SNHU also has much to do with the support of his teammates, who want nothing but the best for him.

“My teammates want me to succeed,” said Gutting. “They encourage me to be the best I can be and they pretty much push me to make me better as well.”

Teammates Ryan Spagnoli and Brett Strawn are two of Gutting’s best friends on the team. They both strive for Gutting to succeed and they demonstrate that in their actions at practice and during games by keeping his spirits high and lending a helping hand whenever he may need one. They are also greatly impressed with his goaltending skills and they admire his dedication to the team.

“I’m fortunate to have Kurt as a teammate,” said Spagnoli. “He works hard on and off the ice. He’s a pleasure to be around every day. In practice, we get to shoot on him and work on our game and him being the great goalie he is, he makes it tough for us to score, but that just goes to show how good he is.”

“It’s special having a teammate like Kurt,” said Strawn, who leads in points for the Penmen. “He’s one of a kind. He’s always working hard, in practice and off the ice. When I can’t score on him during practice, it makes me want to score on him even more. He’s a great guy to work with in practice and I think his work ethic says something about his personality.”

With playoffs right around the corner, Gutting has made many goals for himself and his team, including winning the Northeast-10 Conference Title. To achieve these goals, he hopes his teammates and coaches continue to push him and critique him during every practice.

“I look forward to playoffs,” said Gutting. “I want this season to last as long as it can. I’m pretty lucky to have such a good group of guys to see each and every day and compete with. We make each other better. We’ve got to cherish each day together going forward; we can’t take it for granted. Whether I or Slatky is playing in the playoffs, if we win, it would be all I can ask for in a successful season.”

Catherine Lachance
Catherine is a junior at SNHU majoring in communications and minoring in psychology. She is in her first year as Lead Copy Editor for the Press. She previously served as Sports Editor for a year and a half. She has a passion for writing and sharing people's stories and loves interacting with the SNHU athletic community. In addition to the Press, Catherine has written professionally for Turley Publications in Palmer, Massachusetts. She is also a tennis coach at Longmeadow Country Club in Longmeadow, Massachusetts during the summer. Catherine is also working on her website, Cat's Writing Blog, where she shares all the stories she has written for press, as well as personal experiences she has gone through. She hopes to receive an internship next year at a journalism or marketing agency.

April 13, 2022 Adam Dufault
After an offseason of strong preparation, the SNHU men’s baseball team boasts a record of 17-5 after a win on
Sports