The Women’s Center at Southern New Hampshire University (SNHU) hosted the Take Back the Night event on Sept. 29 at SNHU’s Green Space. They conducted this event in order to raise awareness for sexual assault and violence on college campuses.

The event began at 7:30 p.m. and featured a few guest speakers including Jessica Sugrue, the CEO of the YWCA of Manchester. A number of other associations on campus, including the Outreach Association and the sisters of Phi Omega Psi, participated throughout the night by giving speeches, creating rally signs, and placing lanterns along the route. After introducing the event and its cause, these associations led the participants on a walk around campus.

“The purpose of Take Back the Night is to raise awareness about the issue of sexual assault – particularly on college campuses – and to provide survivors and advocates a safe space to share experiences and speak out against sexual violence,” said Brooke Gilmore, Director of the Deborah L. Coffin Women’s Center.

This event was the first in a string of events to help promote the Enough is Enough campaign which encourages college campuses to host more violence prevention initiatives.

Sheila Lambert, the Director of the Wellness Center, was present at the event to help spread the message that those affected by sexual assault and violence can go to the Wellness Center in order to talk privately in a safe and secure area about their experience. 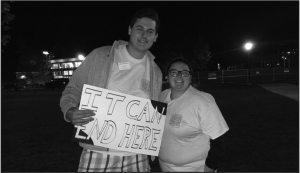 “My hope is to raise awareness, support survivors, and let them know about the Women’s Center and the [Young Women’s Christian Association] (YWCA),” said Lambert.

Sugrue and the YWCA were here for their first Take Back the Night to further help raise awareness for sexual assaults and let the victims know that they are not alone. She hoped to let students know how serious sexual assault is, especially at this early a time in the Fall semester.

“We could fill three times over Gillette Stadium with all sexual assaults in New Hampshire just in the last year,” said Sugrue.

She let students know that if they do not feel comfortable discussing their experiences with someone in person, then they are able to call the YWCA’s hotline for complete privacy.

Sugrue also brought up recent sexual assault charges that made headlines like the Brock Turner case. She found it terrible that the news focused on Turner’s swimming instead of the assault itself. She feels that we, as college students, are in a position to shift the dialogue and focus of cases such as these in order to support the victims and help prevent further incidents.

Richie Oliver, a Junior SNHU student and member of Student Activists for Gender Equality (SAGE), was approached by Brooke to attend the event and came to show his support for the cause.

“Men don’t give enough of a voice in this,” said Oliver. “If we stay silent, nothing will come of it. Guys, girls, regardless of gender, we must stand up.”

CCEL To Conduct Eighth Annual Give A Little, Feed A Lot

September 7, 2016December 16, 2017 Nicole Clark
The Center for Community Engaged Learning (CCEL) will be conducting their Eighth Annual Give a Little, Feed a Lot event
News

February 22, 2017December 16, 2017 Addison Thyng
“Soulslike” is a term that is being tossed around a lot lately. Ever since FROM SOFT­WARE’s “Dark Souls” stormed the
News